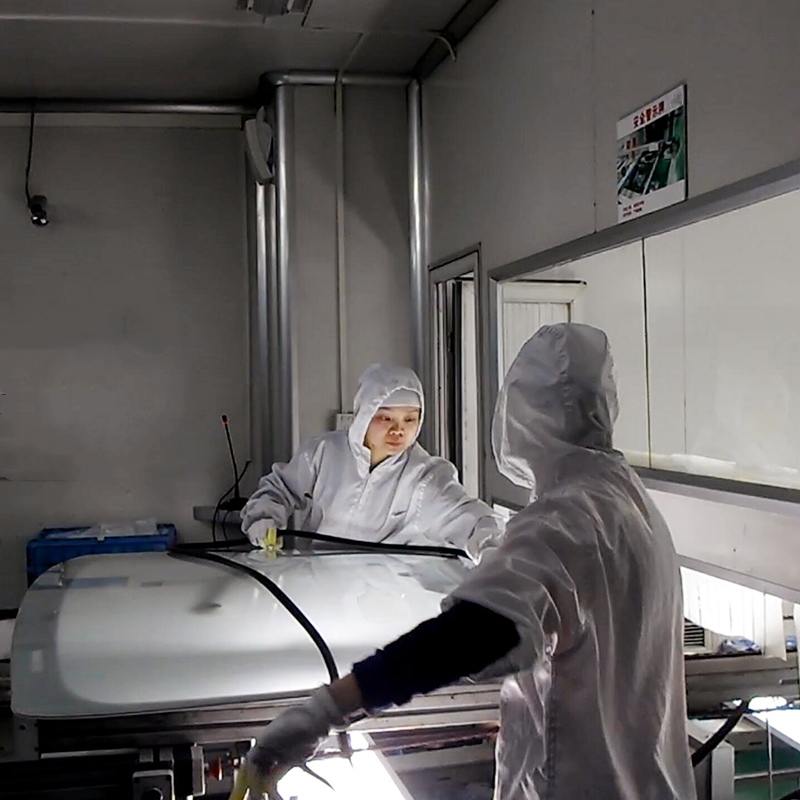 This assembly line is usually installed in a climatic control clean room where temperature and humidity are well controlled. The longer the conveyor length, the higher the productivity. The assembly conveyor could be incorporated in line with subsequent pre heating furnace / De-airing machine and autoclave. This design minimizes glass handling to the least labor force while for continuous mass production.

In the process of laminated windshield glass production, after glass bending and washing drying process, the inner and outer glasses is going to combination with the PVB film together through this conveyor line, Assemble PVB interlayer in between two pieces of glass, Trimming of Excess PVB Film around Glass Edges, Wrap Silicon Rubber Rings around Glass Rim.

This operation needs to be done in a special environment, an autonomous air-conditioning system ensures constant thermo-hygrometric conditions for the PVB sheets.

2Features
● The transmission action of the whole line must be consistent and also with bend glass washing machine and De-airing line/vacuum furnace.
● In order to cooperate with the curved washing machine, the glass must be conveyed with the concave surface facing down, and the height of the working surface of the support block must be sufficiently high from the equipment to avoid contact between the equipment and the glass.
● During operation, the entire line must be transmitted smoothly to ensure that the glass is in good position and does not shift.
● The whole line must have anti-rust measures to avoid polluting the filming room.
● The transfer block in contact with the glass must be smooth and not scratch the glass.
● In order to facilitate the operation of the PVB film and the rubber/EPDM ring for the windshield or laminated automotive glass window, a lifting system required for the easy operation of the inter layer and vacuum ring.
● In order to reduce the number of operate persons to manual handling the glass, an induction turning machine is added at the position of the PVB laying.

● The glass is transferred softly during transition between belts of serial conveyors
● Glass positioning system.
● It adopts anti-rust treatments to avoid contaminating the laminating room.
● Lifting up system at the PVB laying up station and vacuum ring process station, easy for the manual operation.
● Each glass transmission line is equipped with sensors, which can detect the position of the glass for the control.
● Conveyor speed adjustable, with frequency inverter.