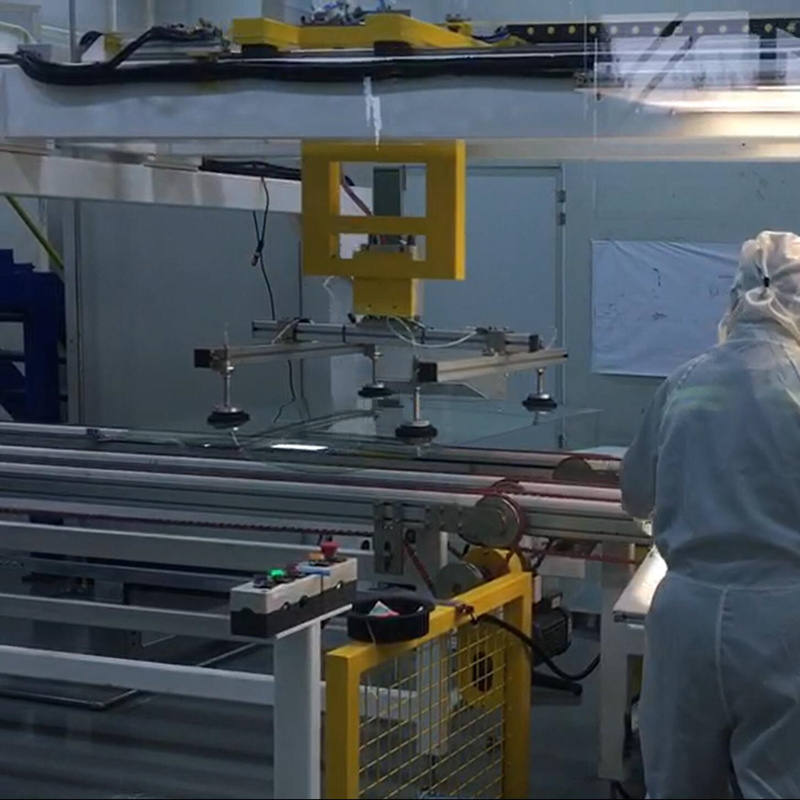 A typical automobile windshield is a compound pane, made of two thin glass sheets, the inner glass (the one on the inside of the car) and the outer glass, joined together by a special plastic inter layer made of Polyvinyl Butyral, or PVB.

This operation needs to be carried out in a special environment, clean room is required. and the autonomous air conditioning system can ensure the constant temperature and humidity conditions of the PVB sheet.

Laminated glass is a safety glass made by sandwiching PVB film between two or more pieces of glass and then firmly combining with high temperature and high pressure. Laminated glass is widely used in automobile and bulletproof fields. The laminated glass production line is usually composed of a glass washing and drying machine, PVB Assembly line, a fully automatic walking suction cup or robot, a PVB film laying system, a transition conveyor, preheating and prepressing. The whole line adopts PLC centralized control, with high production efficiency and yield, easy operation, safe and reliable. According to customer requirements, automatic online with different configurations can be realized.

1.1 Structure
This PVB Assembly Conveyor is composed mainly of

● Belt conveyor (4-6 conveyors) height from 1120 to 900m, it’s customized according to the technical requires and space limits.
● Two sets lifting up system for PVB trimming section and Vacuum ring process section.
● Lifting up system with 360 degree rotation, easy for the automotive glass vacuum ring process.
● PVB film stack to store PVB film for laying on the first piece of glass sheet, this designed on a bridge rack.
● One automatic loading system for outer glass.

● The glass transmission conveyor adopts adjustable belt, high quality belt, ensure no marks on the glass.
● During the transition between 4 to 6 sections continuous conveyor belts, the glass is transferred smoothly.
● With adjustable production speed, which is available with equipment before and after, such as bent glass washing machine and automotive De-airing system.
● All parts adopt anti-rust treatments to avoid contaminating in the laminating room.
● Lifting up system at the PVB laying up station and vacuum ring process station, easy for the manual operation.
● An automatic glass loading system, operator don’t need to the manual handling the Outer glass above the inner in the windshield assembly after putting the PVB material on the inner glass sheet.
● Each glass transmission line is equipped with sensors, which can detect the position of the glass for the control.